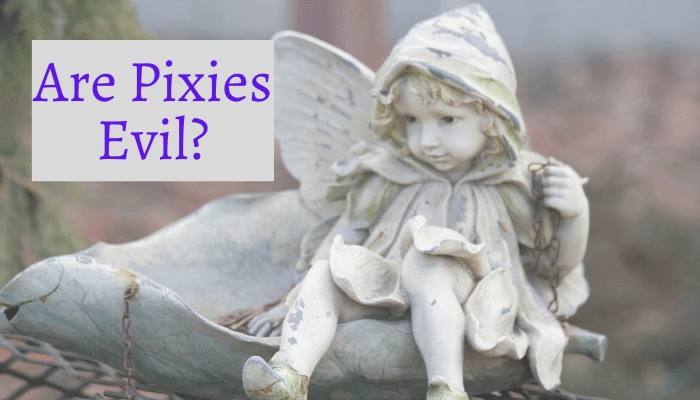 Pixies are mythical creatures who are thought to roam Britain. They are based in the southwest of England around Devon and Cornwall, making their homes in the hills or dense forests.

They are sometimes confused with elves or fairies, however, there are many differences. For example, fairies are much larger than pixies are.

Whilst fairies are stereotyped as pretty, elegant creatures, pixies have pointed ears and can even resemble trolls. Sometimes they ride on horseback, and they have even been known to be able to shapeshift.

Although pixies are small and seemingly harmless, not all of their stories are nice ones. Pixies can be evil and enjoy causing trouble. Pixies tend to be very dramatic and prone to overreacting.

Normally their evil tendencies start from them feeling disrespected or hurt, however, the punishment they give is normally much worse than the crime.

What Evil Things Do Pixies Do?

Another myth is that they are the souls of unbaptized children (as thought by Christianity), that remained on earth to cause mischief as they could not go to heaven.

So, what evil things have pixies been known to do?

There are myths of fairies, pixies, or trolls taking over the body of a young human. These babies would be known as changeling babies.

In Cornwall, there is a stone called Men-an-Tol. Here there lives a guardian pixie. The parents of changeling babies must bring their child to this stone so that the good pixie can reverse the spell, and bring the baby back to its real form.

If a human travels through the land that belongs to the pixies and does not respect them or their territory, then the pixies will lead them astray as a punishment. Normally they will be sent to the moors where they will end up getting lost and unable to find their way back.

Mortals can get confused by pixies so badly that they will never recover. They can be sent into a state of madness, left walking around aimlessly speaking in unknown languages and singing songs to themselves.

‘Pixie-led’ or ‘pixilated’ is to behave in a mentally unstable way, acting intoxicated or bewildered. This describes the magical effects that pixies have on mortals. Pixies have been known to seduce humans and make them their mating partners. Both men and women have followed the pixie call.

Often, mortals who are led astray by pixies are never seen again; they simply vanish without a trace.

For their amusement, pixies will kidnap children for several days and then return them once they become bored.

In the moorland of Devon, pixies disguise themselves as rags. Children will find these rags and begin to play with them, the pixies will then trap them. Pixies are also recorded for luring children in with the promise of treasure.

When the pixies are fed up with the children, they cast magic on them that knocks them out. They then take them back to the same spot they abducted them from. When the child wakes up, they will have no recollection of what happened, or how long they’ve been missing for.

Declared war with the fairies

The fairies who lived in Somerset wanted to extend their land area and therefore attempted to make a home in Devon, where the pixies lived. The pixies refused to share their territory and declared war with the fairies.

The battle between the pixies and fairies was violent and bloody, which the pixies eventually won. The fairies were told to never come back, and never attempt to make Devon their home again.

To this day it is believed that no fairies live across the Devon borders, only pixies.

Whilst legend points pixies towards being evil and conniving, not all pixies are the same. Some good pixies reverse or try to prevent the bad pixie’s tricks.

Whilst pixies punish humans who offended them, they also reward humans who do good. Some pixies are even considered to be good luck charms.

Also Read: What Do Pixies Eat?