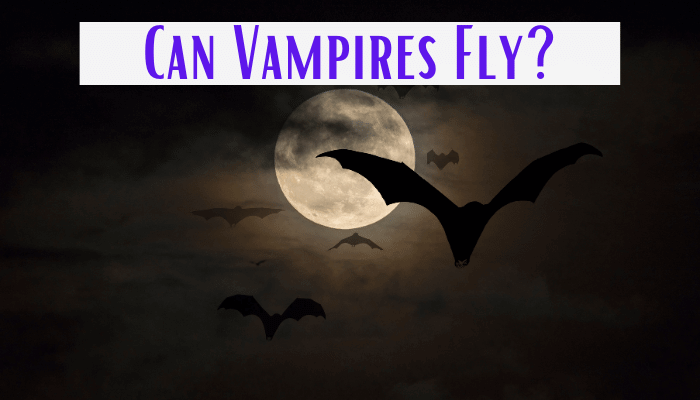 Generally, there are those vampires that could fly while others didn’t have those flying abilities. This is evidently because most European vampires had no power to fly, but they could levitate.

Contrary, Asian vampires are well known to fly for a long distances. The Malaysian vampire, Penanggalan, is known to set a record by flying about as a neck and head with floppy entrails.

However, some vampire-like- animals, such as the banshee, popularly known as the wailing spirit, had the flying ability.

An ancient Roman Strix, initially known as the screech owl, is largely associated with the Italian witches who had powers to transform into a bird-like creature and mostly as an owl or a crow. This gave them the much-needed ability to move very fast from their enemies.

When the vampire is associated with a bat, particularly in Dracula, its flying skills increase significantly. The West African vampires are known to transform into a winged spheroid of light that could be seen in the night.

Vampires of this nature were just ordinary members of society, but they could peel off their skins, and by doing so, they acquired some flying abilities. These vampires would change into an animal after feasting, but they were at times chased away and unfortunately killed or wounded when caught by the community members.

Typically, 20th-century vampires are known to change into bats or owls to fly. However, bats in movies resulted in a problem due to the advancing picture techno effects.

The solution was to use a camera to capture the bat’s perspective since the audience would see the same view but not the actual bat. The bat’s eye technique was successfully applied in Dracula rising and Innocent Blood movies.

Can Vampires Fly and Walk On The Ground?

Those vampires that could not attain the ability to change into a bat or a flying bird would remain on the ground, thus limiting their movement. Some extraordinary vampires are seen in the Ann Rice story. Although they did not transform into bats, they could somewhat fly.

This is reviewed when Lestat de realizes his creator, Magnus, uplifted him to the top of a neighboring building. There is a record of vampires flying while in human form, as evidenced in The Lost Boys movie.

Two airborne vampires are fighting against each other when a police officer attempts to arrest them, where he is forced to catch the criminal in the air. Those who considered this vampire to possess supernatural power but its flying ability had little to do with its magical powers.

Do Vampires Have Wings?

Are you aware that several vampire mythologies involve vampires flying after transforming into bats from their humanoid form? For instance, Bram Stoker, a subject in the Epic novel Dracula, is known to take the dual structure of a bat and a vampire.

Although Dracula’s story is not the sole story involving vampires transforming into winged bats, it has a perfect illustration.

Indeed, flying vampires’ mythologies date back to many years in various civilizations and cultures, including those of Central America, Asia, and Europe.

On arrival to Mexico, the famous Spanish explorers with adequate exposure to the 18th-century vampire legends came across a rare type of bat that showed huge disparities from the previous forms of vampire they had seen.

Although the bat could have been a typical vampire bat, its blood-drinking behaviors make the explorer believe it’s a real vampire. They name the vampire after a previous vampire that had shown actions similar to it.

The more a vampire ages, the more they gain more power, which means that those vampires who manage to stay alive for many years can develop remarkable abilities than younger vampires. These are vampires who have lived for thousands of years.

Although younger vampires may also possess some low-power levels, particularly after transforming into a vampire from their human nature, they are limited. For instance, they can maintain some prophetic vision abilities or mind-reading powers.

Flying is usually possible with higher-power vampires who have accumulated power over many years. Using a strong pair of wings, vampires can fly to the top of a building. These wings grow over time to be more powerful, and they can also retract, thus hiding them.

Vampires are immortal predators that possess supernatural powers that increase by drinking human blood. Typically, Vampires are physically stronger than humans and also include superhuman strength.

Features of Vampires wings. They are very strong. This is to make the fly very fast to capture their prey even at long distances. They even run over the water due to the supersonic speed they can fly at. Retractable. Vampires will hide their wings, especially when walking on the ground.

However, if they sense danger, they will retract their wings and fly away.

What Other Abilities Do Vampires Have?

Super strong. Whether big or small, a vampire is much stronger than its prey of any shape or size. They will capture their prey effortlessly and split them apart with ease.

Vampires will hear and locate the sound’s exert origin even when it is coming from several meters away.

Vampires will detect the smell of items that an ordinary human cannot.

Vampires will climb and jump on tall buildings faster than humans.

Their eyes can identify their prey in darkness even when the target is far away.

In recent movies, the ability of vampires to move at supersonic speed is perfectly illustrated in the Moonlight television series about Bill Compton, a 173 years old vampire.