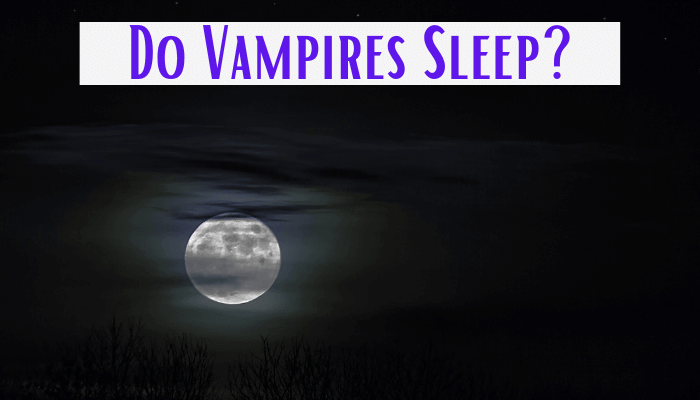 We all know that sleep is an essential function of a living human being, but this isn’t always the case with vampires.

While a good sleep allows a person’s mind and body to recharge, thus refreshing and enhancing a person’s alertness during their active hours, vampires are soulless creatures that do not need any form of resting for their survival.

Let’s start by clarifying the notion that vampires sleep at all let alone in the day.

A vampire doesn’t sleep, neither do they need rest. The main purpose of returning to coffins during the day is to avoid getting into contact with sunlight, resulting in death.

During the night, vampires hunt for fresh human blood after spending the day in their hiding places. They are not afraid of going into the darkest places or in secluded buildings where humans could be sleeping.

Vampires can also visit their loved ones in their homes during the night although they will still demand to suck blood from them without caring if they are relatives.

Let’s answer some more questions that you may have about vampires’ sleeping habits.

Does sleeping enable their bodies to regenerate and keep them in a healthy condition to combat diseases? Is adequate sleep essential for a vampire’s proper brain functioning and failure to impair the mind to process memories and concentrate? Do vampires sleep for their survival?

Sleep is not an essential function in vampires, unlike in humans. Yes, vampires do not need to sleep to survive, which means that they can stay for a long time without sleeping. Although vampires are conscious and supernatural being powered by the blood magic gained by trading their souls in exchange for the magic powers, they are dead creatures that don’t require biological functions such as sleep.

From a technical perspective, vampires are clinically dead since their hearts don’t pump blood to their body parts. This means that their heart and body don’t require resting for survival needs and are considered immortal.

Vampires are soulless creatures hence considered dead, although they remain conscious by using the blood magic which influences their body functioning, including sleep. Since they lack souls, vampires are not limited by biological needs such as sleep, unlike humans.

Where Do Vampires Sleep?

During the night, vampires are very active while hunting for fresh human blood to feast upon, fulfillment and excitement. Very early in the morning, a vampire must return to the coffin or cemetery where its body will rest during the day.

However, that doesn’t mean that the vampire went to sleep because it was very tired and needed resting. Vampires do not require to rest for their survival. Typically, vampires return to coffins during the day since sunlight is one of their greatest enemies.

Sunlight can significantly threaten their powers, sensibilities and even cause them to burst into flames and burn into ashes. During the night, vampires are active, hence named the night creatures who love dwelling in darkness; dark shades give them much-needed comfort from their nagging insomnia.

During the day, the vampire won’t come out of their coffin, which means they will virtually be resting.

How Long Do Vampires Sleep?

It depends on the location where the vampire is. For instance, during the summer, the sunlight starts appearing as early as 5:30 am. Most vampires will return to their coffins before dawn and come out to hunt for blood during the night, from 7: 30 pm.

In simple terms, vampires can live their entire life without sleeping; they will hide in cemeteries during the day to avoid direct contact with sunlight. Vampires will work all night long and still have the energy to party during the day without the need for sleep.

They will see prey far away, even during the darkest night, as if their eyes have special powers enabling them to see through the dark.

According to Count Dracula, the Bram Stoker’s, one of the most classic vampire folklore, a vampire can stay for several weeks without sleeping and remain active.

The Dracula, headed by Francis Ford, is about a vampire rampaging through the late night while seeking justice for his loved wife, who had committed suicide after the wrong mistreatment.

Count Dracula has traveled for centuries in several countries while seeking peace in violence-inflicted areas while haunting the world where his loved one had been dwelling. The vampire needs to gain all the energy, and so he will even stay in the darkest places in Count Dracula’s desirous spots.

He loves the total darkness provided by a real Blackout Shade that would prevent the entry of light that would otherwise annoy his stressed soul. However, his journey is full of tragedies that finally overwhelm him, thus collapsing and bows to his final death.

When a vampire is bone-tired and overwhelmed by lack of sleep for several nights, he will become more ravenous, thus compelling him to drink uncontrollable blood to replenish the lost energy.

What Time Do Vampires Go To Sleep?

Each vampire has its ideal hiding area, either in the coffins, cemeteries, or a room they are familiar with.

It is, therefore, reasonable to say that a typical vampire will sleep from 4:45 am and probably wake up at 7:30 pm for hunting. The most amazing thing about vampires is that they establish a sleep routine that they can follow for as long as they exist.

Vampires can be best described as night creatures! Yes, a vampire can be in its true nature during the night and even channel its vampirism energy in the darkness but not during the day.

Although vampires can remain active throughout the day and night, sunlight, noises during the day, and restless people moving from one place to another make them prefer sleeping during the day and waking up at night when they can comfortably hunt for the blood.

However, it’s important to note that vampires sleep during the day not because sleep is essential to them but to avoid burning into ashes in the sunlight or the endless torture vampires receive when seized by humans.

First, vampires do not need sleeping as they are already soulless creatures roaming in the world of the living, searching for fresh human blood to feed upon. Vampires will spend the whole night hunting, feasting, and indulging in cerebrations but return into their coffins early in the morning before the sunrise. The fact is that vampires can sleep, but in case of sleep deprivation for several weeks or months, they won’t suffer from lack of sleep. However, they will need to feed on live human blood to keep them active. Some vampires, especially the hybrid of young vampires, can sleep, but as they age and become more powerful, the urge to sleep diminishes.

Do Any Vampires Sleep?

Yes, some original hybrid vampires will fall asleep during the night to the extent of losing their smelling ability such that a human being will come near them without them realizing it.

A good example is the Niklaus Mikaelson, an original hybrid vampire that is seen sleeping in various episodes. When Camile wakes up at midnight, she finds the vampire sleeping close to her with his eyes closed, implying he’s somehow asleep. Hybrid vampires seem to have some weakness that makes them appear as if they are not yet fully developed into vampires.

It’s still unclear if hybrid vampires have retained some of their sleeping habits before evolving into vampires. All in all, sleeping for most vampires is more about their safety during the day to avoid direct contact with sunlight than a form of resting.

Vampires’ eyes have transformed into powerful gadgets that won’t get exhausted after staying awake for quite a long time. For instance, their iris is made up of a certain bioluminescent bacteria that can absorb light so that it appears black even in bright light and grow bright yellow in total darkness.

Besides, the reddish iris is a result of blood present in them, but in the case of starving, the blood disappears to power its existence, and this changes the color of its eyes.

When a vampire wants to use its eyesight power to locate something that’s very far away, the white part of the eyes might turn yellowish, indicating high concentration.

A crying vampire has a terrifying appearance, and its tears are said to contain blood. Vampires’ eyesight is particularly very powerful such that they can see a human heart rate from several miles away, especially when it’s hungry.

Vampires can see anything far past the normal spectrum, such as identifying their targeted prey while it’s several miles away.

In the film, The Lost Boys, ‘ vampires appear to be quite frightening. The vampires are quite violent and have threatened the entire society’s wellbeing. Although they have nocturnal abilities, they require to sleep for some time before continuing their wicked deeds during the night.

Some vampires, especially the young vampires, will install their rooms with darkening shades not sorely for decoration purposes but to ensure darkness in the room, especially during the day, since they can continue partying even when there is sunlight from outside.

How Long Can A Vampire Go Without Sleeping?

Vampires contain a special type of blood in their veins that is said to be from the Original Vampire. This blood gives them special powers and abilities to stay for a long time without sleeping.

Such supernatural forces enable them to withstand human weakness that a mere mortal being can’t withstand.

In simple terms, a vampire can stay active during the night as long as it is drinking enough fresh human blood to keep its magic powers in existence.

Vampires are becoming very popular in our societies thanks to recent TV shows like Twilight, The True Blood, etc. Several heroines are known to date vampires. In most cases, vampires are portrayed as very handsome or beautiful individuals who are romantic and possess mysterious powers to lure their victims.

However, in as much as they seem attractive, there are several risks of associating with a vampire, particularly on the individuals sleeping habits. Typically, the mental risks can be astronomical as they can result in insomnia, just like the vampires themselves.

Now associating with a vampire means that you might end up negating yourself from sleep to cope with their infinite energy. An ordinary human being requires sleeping, during which the body re-charges. There’s no way a human can go for several weeks or months without sleeping.

Unlike humans who can’t survive for long without sleep, vampires, on the other hand, have nothing to lose as they aren’t affected physically or mentally by lack of sleep for a long period.

Dating a vampire can further worsen individual mental health, especially due to increased anxiety, which means plenty of sleepless nights. Bearing in mind that vampires are cold throughout, being in contact with their bodies for a long time can result in hypothermia.

With hypothermia, the body will lose a lot of heat than it is generating, resulting in discomfort during sleep. The body will react by increasing the heart rate, shivering skin turning blue, and increasing breathing. Such conditions will affect an individual’s quality of sleep.